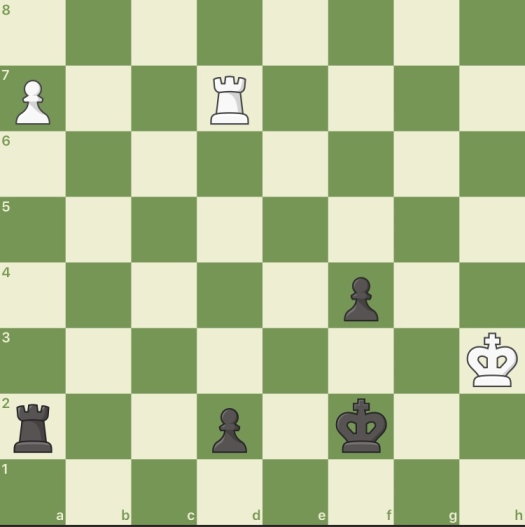 Black to play at the end of an 80 move marathon on Board 2.  The game was drawn but a nice win is available. Can you find the win?

The early skirmishes in the match went in our favour, although I was under some pressure on board 4, with most of Shane’s pieces aimed in the direction of my king. However, it was complicated, and beginning to run short of time, Shane decided to offer a draw, which I was happy to accept. This was particularly so given that Phil on board 5 had established a bind over Richard’s position, obliging his opponent to give up an exchange to try to free himself. And on board 3 Alex also looked to have the better position, with a space advantage and control of the b file to work with. We seemed to be doing well on the other boards as well, although board 6 was looking very wild.

Phil and Alex duly converted their advantages, and Steve won a pawn in a technical rook ending. He also had the more active king, which I’m sure would have been sufficient to win in most circumstances. However, his opponent had been moving very quickly and this created some time pressure by way of compensation. Aaron’s position on board 1 looked pleasant although Harvey’s king on board 6 had become very draughty and his opponent’s pieces were beginning to bear down on it. At this stage, I’d assumed that Steve would win, Harvey would lose and Aaron get at least a draw. None of the assumptions turned out to be correct!

In Steve’s time trouble his opponent managed to create just enough counterplay to make it difficult, and eventually was able to force a draw in an instructive R+P v R position by checking from the side. Harvey’s king got chased up the board by a volley of checks. However, it wasn’t mate, and his king, in conjunction with queen and knight, was actually threatening a winning attack itself. The game concluded with a draw by perpetual check perhaps to the relief of both players.

With the match won, this just left Aaron’s game against Patryk. Optically Aaron had the better chances with a superior pawn structure, more active pieces and more time on the clock. Suddenly though Aaron’s knight became caught in enemy territory with no safe route home. Unable to find a solution (if there was one), Aaron eventually succumbed on the clock.