With less than a minute remaining, Mike Harris played the ice cool exf and went on to seal a vital and impressive win.

We travelled to Downend in the unusual and unlikely position of league leaders, by virtue of having played one more match than Downend A and having half a point better goal difference. There was much jocularity about us retaining that position at the end of the evening. It was slow travelling though. The M5 had been shut nearly all day and central Bristol was gridlocked. Somehow or other we all got there on time, with Brent taking well over an hour to drive from Clevedon.

Ahead of last nights fixture, Horfield B had jested at their precarious position on top of the league on goal difference.  Perhaps they should have more confidence…

Jerry greeted me with good news and bad news for us. The good news was that they had had to call up a reserve as Richard Savory couldn’t make it, thus depriving them of a 200 grade player. The bad news (for us) was that the replacement was a super sub, their B team’s board 1, Atilla Reznak, graded 227. The extra bad news (for me) was that he was playing me on board one. My, admittedly small, preparation for Henry Duncanson was now useless.

My pre-match instructions had been simple: hold them on the top boards and beat them on the bottom boards. I thought there was a small chance that Downend wouldn’t feel the need to play all their best players against us, but I was wrong. The Downend average grade was 190 and ours was 157. On the top three, it was even more of a mismatch: 208 to 165. Getting even half points anywhere was going to be a struggle.

The match started and I occasionally prowled, looking for where we were about to get turned over. Remarkably, we seemed to be okay. I was a bit concerned that Henry might crush Mike’s unorthodox setup, but Mike seemed happy. My game was bobbing along nicely and Attila was burning time.

Jon was the first to conclude, agreeing the draw on three with Nigel Hosken. 0.5-0.5. 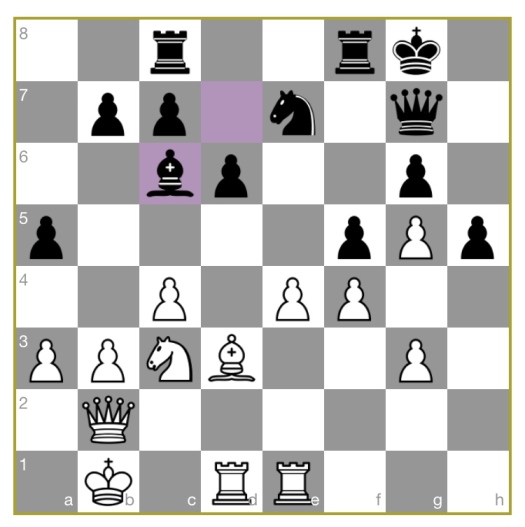 My game now needed some attention, so I missed the drama on five, where I’m told Brent executed a very nice finish. Prakash should have been heading for a draw on six, and was kicking himself afterwards for letting it get away. 1.5-1.5.

My ending started going pear-shaped, and then nosedived. Despite Attila having just a minute on his clock, there was no point my insulting him by playing on. Damn those pesky increments. 1.5-2.5.

Two to go. Chris had won a bishop and was now steering his way through an ending. Meanwhile, I looked at two to see that Henry was in a real mess and was flailing around with some checks trying to stave off a loss. Mike duly brought home the bacon to bring us back level. 2.5-2.5

On board 4, Chris Jones won a piece in a messy position following his speculative b5 push.  Whites c3 nets black a bishop, and in the long term the game.

All down to Chris. Chris was now shepherding the last remaining pawn towards the eighth with the protective arms of a king, bishop and rook round its shoulder. Michael eventually gave in to the inevitable. 3.5-2.5.

A remarkable result! I can’t remember a more remarkable league match than this. The team were great. I was the only one who was outplayed. They followed instructions: hold them at the top and beat them on the bottom boards! And we are top of the table for at least one more week!