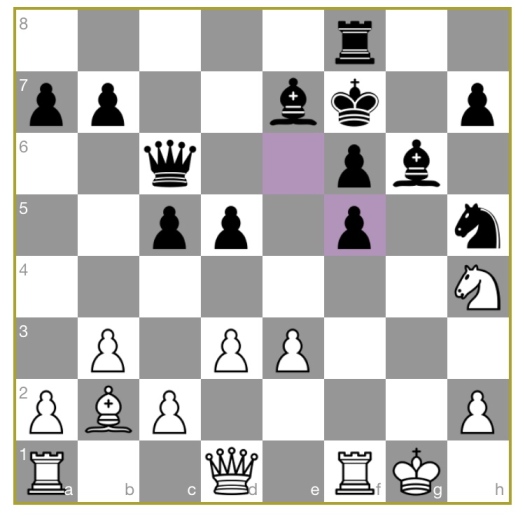 On board 4, Horfield’s Jon Fisher with white got a strong position but misjudged a sacrifice (20. Rxf5??) to lose all his initiative and ultimately the game.

Outgraded again, but just by an average of 10 points this time. Still, we don’t worry about things like that any more. As long as we beat them on the bottom boards and hold them on the top boards we would prevail.

Matias, making his B team debut, won smoothly on 6, and Brent secured the point with a killing attack on 5. Jon came unstuck on 4, missing a tactic. Still, the bottom boards had done what was asked. 2-1.

Battling away on board 2 I was reasonably happy with the position when Paul offered me a draw. I was minded to accept, especially as we were leading. But a glance to my left showed that Mike H was in dire straits and would lose eventually. A glance to my right revealed that the other Mike had a king and rook against king and queen ending. Now this ending is theoretically a win, but the defender can make life hell. Mike could draw it, but it would be easy for him to lose. Counting up, accepting the draw would lose the match, which is precisely why Paul offered it. I had to play on.

Mike H did lose, but Mike L came up trumps with a draw! Now a draw for me would level the match, but I was comprehensively outplayed in the ending. 2.5-3.5.