For the second week in a row, Jon Fisher over pushed in a better position with the unsound 13…Qxh3?? White immediate wins the d4 knight and subsequently the game

For the first time this season we outgraded our opponents, but not by much, 6 points. It started badly for Clifton when their board 4 failed to show, so we were 1-0 up soon after 8pm.

However, our lead did not last for long. Playing Chris Beaumont is never easy, but I was starting to think I was doing okay when I was confronted with a decision. I quickly rejected one pawn advance, …c5, as being a crass blunder, and started analysing other ways to hassle Chris’s bishop. After working my way through 3 or 4 candidates, I played … c5! The exclamation mark is for stupidity, not brilliance. It was probably resignable straightaway, but I played on for another ten painful moves. 1-1.

Brent’s game sort of petered out to a draw, but Chris was going great guns a piece up on board three and efficiently dispatched Anton. Unfortunately, Jon hallucinated a great queen sac but Tomas counter queen sacced and the resulting tactics won a piece. 2.5-2.5.

The real drama was still to unfold on board two. Mike had been struggling to get control of the open c file for most of the game, but all the heavy bits came off, leaving Mike with a good bishop against bad, but no way to make progress. He was also much shorter on time, so offered a draw. To everyone’s surprise, Manuel turned it down without hesitation. 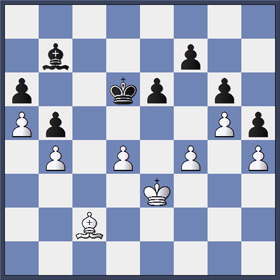 A bizarre sequence of moves followed, with Mike moving his bishop back and forth between c2, d3 and e4, and Manuel shuffling his bishop from b7 to d5 and going on tour with his king, which had no way of getting through. After a contretemps because Manuel had stopped recording with 15 minutes on his clock, to Mike’s one minute, Mike tried the draw offer again. Again, the immediate refusal.

By now, the spectators were getting restless. It looked like the two were going to shuffle bits backwards and forwards all night, and with 10 second increments there was nothing to stop them. Mike would find it difficult to claim repetition, or under the 50 move rule, as he had not been keeping score.

Manuel’s king, seemingly bored with being in the centre, went on a stroll to the corner, ending on g8.

Mike seized his chance. 1.Bxd5! exd5 2.f5! gxf5 3.Kf4 … With Manuel’s king too far away to help his shattered pawns, Mike was able to crash through and promote his d pawn, pointedly underpromoting to a rook. Manuel snaffled pawns on the kingside but the rook was swapped off for Manuel’s only hope, a passed h pawn, and it was all over. 3.5-2.5.

Then the reason for Manuel’s refusal of draw offers became clear. He thought that he needed to win to tie the match! Although this is some mitigation, it doesn’t explain how he thought he could possibly ever win by shuffling his pieces around, unless Mike dozed off and overstepped the time limit.

Our fourth win in six matches! Watch out, Horfield A, we play you next.