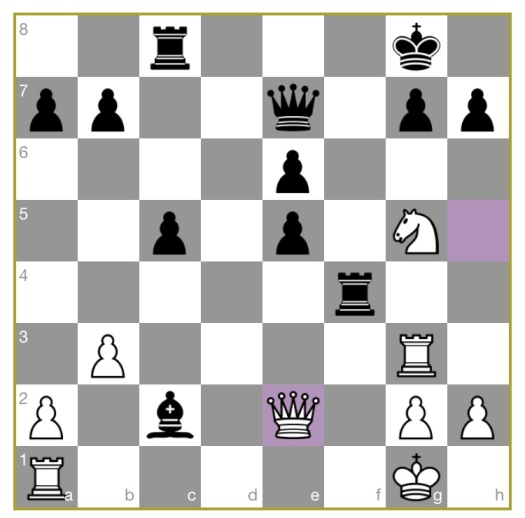 On board 5, very little compensation could be found from Jon Fisher’s misplayed kingside attack and the loss of three pawns! Despite a good scrap, the game dissolved into a lost rook and pawn ending for Horfield

Matches at the Students’ Union (or Richmond Building, as we must learn to call it) used to be unpredictable events. The playing room was often soulless, and the room-booking gremlins used to amuse themselves by putting chess next to the Drumming Club, or a light opera rehearsal. So, it’s a pleasure to say that the current venue, the Gromit Room on the 4th floor, is spacious, well-lit, and … quiet! And there’s a reasonable bar on the ground floor. The one thing left to moan about is the parking restrictions until 9pm and that’s not their fault.

This was a difficult match to get a full team out. We were one short, but the C’s played two days earlier, and the D’s were playing the same night as us. I tried 10 different players in all, and I’m very grateful to Nigel for stepping in, especially as he had family commitments the same day.

It seems the University has just one clock that will do increments, so that was on top board, and the rest of us played under the old time limit. This arrangement was to have an unanticipated influence on the match outcome.

Chris was the first to finish – on board 2. He promises that his scintillating game will feature in his forthcoming ground-breaking book, ‘Draw with the Dutch!’. The exclamation mark in the title is there to try to inject some sense of excitement, apparently. I cannot possibly comment – I didn’t see it.

Meanwhile, I was trying to get some initiative on board three, which only served to give my opponent some useful space and counterplay. Having seen that Brent was winning, I proffered a draw. Victor was as risk averse as I was. 1-1.

Brent duly tucked away a point. I don’t know quite how he managed to turn a level game into a completely won one, but it’s a useful skill. 2-1.

However, things were not looking so bright elsewhere. Jon was heading into a lost ending. Nigel was in a rook and minor piece ending where his opponent had the initiative. On top board, Mike’s attack had got nowhere and now his king was being threatened. Nigel and Mike were both short of time. It looked like we could lose all three. Jon did lose next, though he fought hard to the end. 2-2.

Mike was now down to less than 30 seconds, while Bogdan had a few minutes. Fortunately, the 10 second increments were just keeping Mike alive. No such respite for Nigel on the non-incremental clock, who had less than two minutes to his opponent’s six. Nigel was defending a knight and bishop versus two bishops ending, with several pawns each.

Then Bogdan blundered. Mike pounced, winning a piece and cleverly forcing off the heavy bits to leave himself with bishop and pawns v pawns. Mike had just 20 seconds on the clock, but Bogdan resigned, knowing that Mike could easily win the ending on the incremental time limit. 3-2.

On the remaining board the position was now almost certainly drawn, with Philipp unable to make headway. The problem for us was the clock if Philipp tried to run Nigel out of time. Fortunately, Philipp made a very sporting draw offer, which I suspect some other players would not have done especially as it gave us the match.

Our fifth win of the season, all of them by the narrowest possible margin.