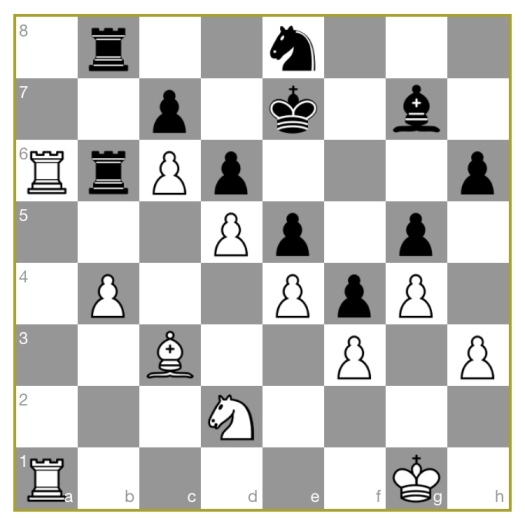 This last match before the Christmas break always promised to be a tight one against one of our main rivals, and so it proved.

Unfortunately I missed much of the action, as I found myself in trouble on board 3 after misplaying the opening against Gareth, and had to switch to survival mode. It wasn’t long though before the first result came in when Harvey’s game was quickly agreed drawn on board 6.

At this stage I could see that boards 2 and 4 were heavy manoeuvring affairs involving interlocking pawn structures. Phil on 5 was playing another f5 Ruy, and the top board clash (arising from a QGA) looked more fluid and tactical, particularly after Aaron played g5 in front of his castled king.

Alex and John on board 2 were next to finish I think, as the blocked position didn’t allow much progress to be made. However Steve on 4 was able to make much more progress, as Duncan found his pieces bottled up behind his pawns. This allowed Steve’s pieces to infiltrate without any counterplay and the point was secured. With Phil agreeing a draw on 5, this just left the board 1 and 3 games.

Board 1 resolved into an interesting endgame, in which both players thought they had chances, although given the time shortage it was not too surprising that a draw resulted. In my game, I finally managed to get my pieces out of their passive positions, and there was nothing left to do but repeat the position.

So 5 draws and a win – not quite as adventurous as in some of our recent matches, but certainly a very welcome result against tough opposition. We now need to carry our form into the second half of the season.