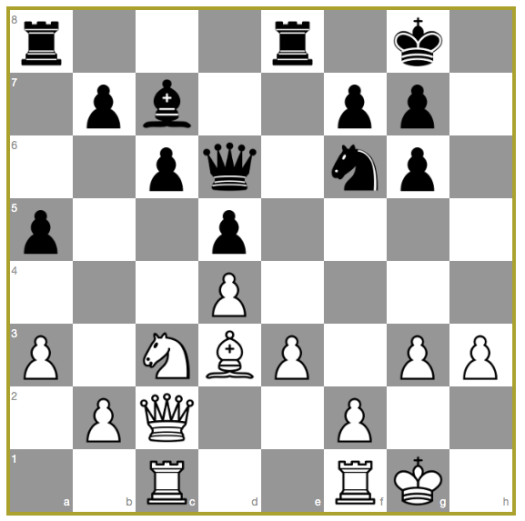 After white played 20. g3, Rob Attar played the tactic Rxe3 and went on to win the game for Horfield

It was a potentially tricky match with a University ‘B’ team that switches players around a lot. This match they turned up with one A team, 2 B team and 3 C team registered players.

Prakash got the team off to a good start playing a solid game where he always had a positional advantage which he soon turned into a win. This was followed by Matias who quickly turned a slight advantage into a victory.

Bob reached an even end game with rook, bishop and a number of pawns still in play. He advanced his King and managed to create a past pawn which was first to queen and the game was his. Three up with three to go, however, the remaining games were far from clear.

Tom was a bishop to rook down but with a slight pawn advantage. Nigel was a queen to bishop and knight down but had good counter play and Rob was attacking but it wasn’t clear if it was enough.

Tom couldn’t hold off the strength of the rook in the end game and it was then 3-1. Rob’s attack finally broke through and the match result was secure. Nigel had created a mine field for his opponent who managed to avoid any mistakes and with time running out found the way to break through and claim the victory.

But it was too little too late for the University who went down 4-2 and allowed Horfield ‘C’ to continue applying pressure to the other teams at the top of division 2.