Downend looked like they were determined to end the season with some silverware, turning up with three 200+ players.

An early truce was signed on board 5. In a repairing of our match against Downend B three weeks ago, the two Steves also drew: Ours had an edge but decided it was balanced by the clock deficit.

Around this time Derek put us into the lead with an impressive win against the opponent he lost to in the first game of the season.

Either side of me we looked to be doing well. On my right Brent picked up a pawn early with the old Bxf7+, Qh5+ and Qxc5 tactic. He then gave up a couple of pieces for a rook to get his king safe and keep the initiative but then Mike got back into it and I didn’t really understand the rest of the game. On my left Mike offered the exchange for a dangerous looking passed c pawn, which Jerry refused and somehow neutralised the pawn as a draw was soon agreed.

Then the tide started to turn against us: Alex had been level all game but slipped when short of time. I thought I might have to resign early when I allowed my bishop to fall victim to the Noah’s Ark trap but such was my threatened counterplay in compensation, Martin decided to let my bishop go after a long think. I then got back into the game, more of which below, before it all went horribly wrong.

Because of the board count situation this required Aaron to improve on his draw against Attila last time, with Brent drawing. Having a queen against 2 well coordinated rooks, this didn’t look likely and over pressing may have played its part in the final outcome.
Congratulations to Downend on a well fought win.

Now, in the style of the regular “How of Good Is Your Chess” feature of Chess magazine, have a think about what Martin should play here as white against me before reading on. 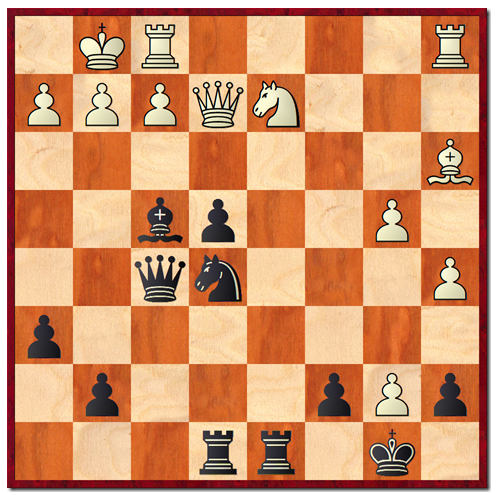 If you didn’t play that but saw that other knight moves lose to 25…. Nf3+ have 2 points.

White played 25.Rad1 and I was convinced that I had a win, but knowing that Fritz would find it in a microsecond rather unnerved me. Now consider what you would play as black.

Have 3 points for 25… Rxd2 if you saw how it’s better than taking with the bishop but just an optimistic point if, like me, you played it on general principals of removing a key defender and hoping to find the killer move next with recapturing the exchange as a backup option.

White recaptured with 26. Rxd2 to reach this position.
You’ve now got 7 minutes on your clock. What do you do?

Have 3 points for 26… Nf3+. Of course after 27.gxf3, ef now fails due to both the rook on e8 and the pawn on f3 being unprotected which was leading me to lose faith in the position but I’ll take it as read that you saw 27… Qh3. Have 2 more if you also realised that after 27.Kh1 the best move is 27… Bxh2 (if you promise you aren’t cheating).

You can have a consolation point if you played 26…Qg5 with the idea of following up with Bxh2+, Ng4+, Qh4 and white giving up his queen to save mate but is still not doing too badly (but if saw all that why didn’t you find Nf3+ ?)

There’s nothing for 26… Bxd2, but you can keep your existing points as a concession as at least your knight is still active.

If you played 26… Ng4 because it looks threatening but without properly analysing it and only spent 3 minutes on this then lose all your points.

Now add up your points: If you got more than 0, well done you did better than me.
Martin then played 27.h3 and the tables were turned. A few moves later we reached a queen and rook ending with level material but I had a very exposed king. Rather than struggle on in a difficult rook ending I unwisely spurned the exchange of queens and was all but mated soon after.