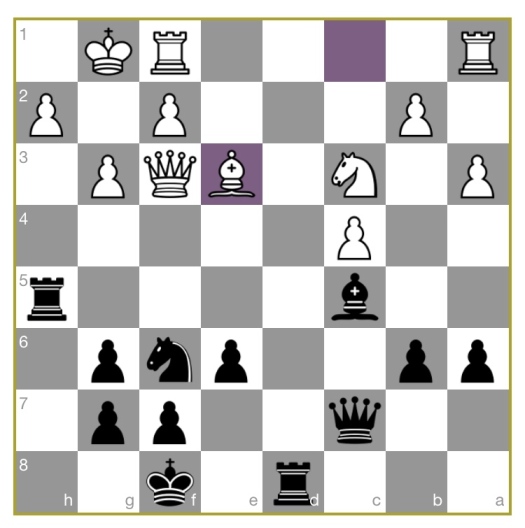 In a very close match, did black miss an opportunity on board 6 when white played 20. Be3?! The game was eventually drawn.
Last month, we lost to Downend B and we should have drawn it, so this time we wanted our revenge. Brent couldn’t make it, but we had got super sub Bob Radford instead, who had already got a win and two draws for us. Mike Brigden apologised for having a weak side out, but it was the same side as played us last time, and we were still outgraded, just.
It wasn’t exactly the same side. I was on board 4, and having expected to play Mike, or Dave, or Ian, I instead ended up playing Oli, who had been promoted two boards. One of our team advised me he was very good, and played the London System. Great! I used to have a good line against the London, but realised I couldn’t remember a scrap of it and was going to have to make it up as I went along.
Peter was first to finish with a draw; no great surprise against Andrew. Then Mike and Chris also took draws to leave the honours even on the top three. I was pleased, remembering our mantra of ‘hold them on the top boards and beat them on the bottom boards’ which has served us well this season. 1.5-1.5.
Meanwhile, I had been trying to work out how to play against the London and failing. So I hit out with a pawn sac which gave me some activity. Probably unsound, but Oliver didn’t think he could win the resulting rook and pawns ending. 2-2.
All eyes were now on the two remaining boards. Bob had been looking slightly worse on five, and Jon slightly better on six. It could go either way. Jon had his pieces on the right squares, but could only move them to not so good squares. It was difficult to see how he could make progress. But Bob helped him out, going a pawn up and exchanging into a rook and pawns ending, and he was up on the clock. Jon shrewdly proffered a draw, and it was now all up to Bob.
Bob had an passed a pawn and there were two pawns each on the other flank. There were some tense moments waiting for the passed pawn to make its slow journey, but it was eventually there! 3.5-2.5.
Our seventh victory in eleven matches, and all by the same margin. Interestingly, although our match score is 64%, we have just 33 game points, 50%. It keeps us in third, but now level with Downend A (who have a match in hand). Jon keeps comparing us to Leicester City of two seasons ago, but another team’s propensity for narrow victories a while ago may be more apt – “1-0 to the Arsenal”.